An artist finds a business model that works for her 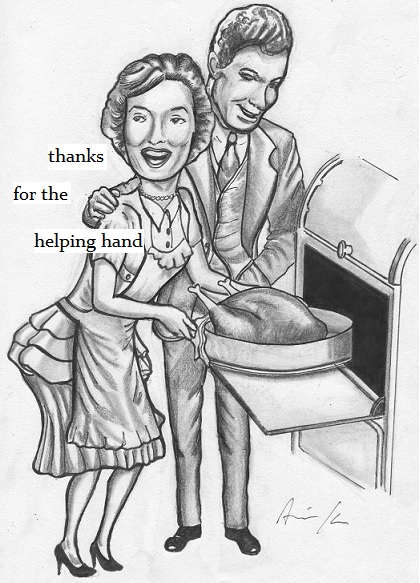 Amidst the yard sale clutter of broken toys and outdated movies lay a stack of vintage editions of Ladies Home Journal. Anne Taintor ’77 picked up one copy at the top of the pile and began to thumb through the magazine’s pages. She burst out laughing.

“It really was as though the women were speaking to me,” Taintor remembers. “I kind of have a chip on my shoulder more than most people do about gender stereotypes. Seeing these women who were so, so, so happy with their new box of detergent was just really amusing.”

Taintor had an idea: She could use these images in collage combined with text that revealed her own interpretation of what these men and women in the old-time magazines may have really been thinking. She got to work collaging.

Years before encountering the magazines, Taintor studied Visual and Environmental Studies at Harvard. When she was a senior, all of her VES friends applied to graduate art programs, but Taintor could not imagine going to more school—she figured she would try being an artist straight away instead.

“I really didn’t know what I wanted to be doing as an artist, what I wanted to be saying,” Taintor says, remembering her first years out of college. So she painted. She designed dresses and sold them to a handful of boutiques until she realized she was losing too much money. She set up a silkscreen studio that never made a profit. She created beautiful soft sculpture necklaces, paying herself only about two dollars an hour for her labor. Throughout all of these jobs, she waitressed to pay the bills.

After having a daughter at age 28, Taintor felt that she really needed to make a responsible living. She had long been a collage enthusiast, and had even taken some collage animation classes through Harvard’s VES department. Her passion for collage in the years after she graduated caught her father’s attention.

Father: “Why aren’t you doing this full time?”

Taintor: “I wouldn’t have any [financial] security!”

Father: “Well you don’t have any security now.”

“I just thought if you had a job then you have security,” Taintor remembers, laughing at her innocence. Her father convinced her otherwise, and volunteered to loan her $600 to get a business started, so Taintor set out on the uncertain road of making collages for a living.

“It was a little bit hard to think of myself as a business person because I grew up in a family of intellectuals and of course going to Harvard we used to make fun of the business school students,” she says. “But that’s what I had become, really. I mean there is some art involved but most of [my job] is really running the business.”

Taintor quickly realized that her collages would not have much commercial appeal on their own, so she figured she could make them into things which might sell better. She put her collages on women’s pins and earrings and started selling them at retail craft fairs on weekends. The business was uncertain and exhausting and it required a lot of travel—something Taintor didn’t enjoy very much—but she was able to turn a profit, and she was doing work she loved.

After a few years of traveling to craft fairs, Taintor transitioned to selling her products wholesale, which added a whole new business dimension to her venture as she started phasing out her retail, craft-based approach in favor of mass-production. Recognizing that her products were whimsical items that were humor and impulse buys for customers, she hired a product developer to help her think about which products might sell well with her designs on them.

“One of my better selling products is flask, so I always have to think about new captions that joke about drinking in a way I haven’t already done a million times,” Taintor explains. She has writers who help her come up with captions for her products, and continues to expand into new markets like kitchen accessories and bedroom accessories. Though she was surprised when one of her customers recommended it to her at a fair, magnets have been her best-selling product for over 20 years.

Redemption for the Nobel Prize in Literature