"You Want To Talk Some Baseball? Alright..."

Unedited and unscripted, Joe Walsh reminisces on his time as a coach and candidly expresses his thoughts, memories, and fascinations with America’s favorite pastime. 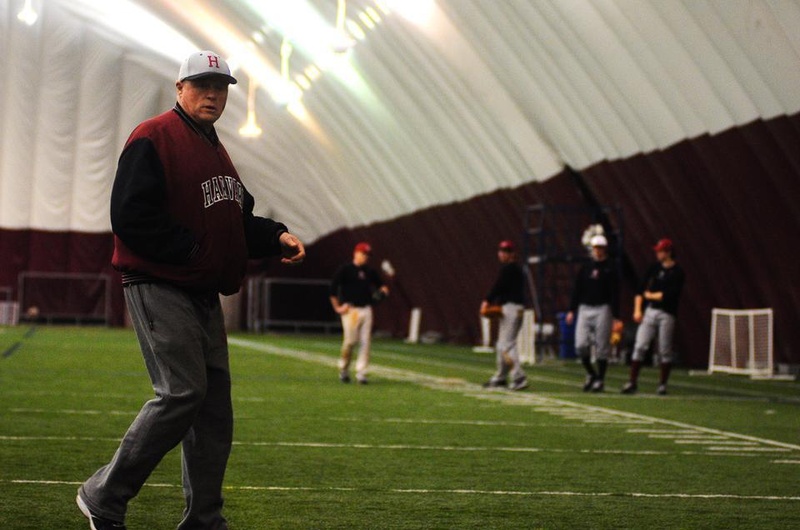 2012 marks Joe Walsh's 17th season as the coach of the Crimson baseball team.

FOR LOVE OF THE GAME

“We’ve just had so many guys, including Frank [Herrmann ’06], who just have that love and passion for baseball. I think that’s what separates so many of our players, whether they had great seasons here or not. It’s a game you grow up with as a child; it’s a game that stays with you. And that game of catch that you play in your backyard with your son or daughter is always going to be memorable. I think that’s what makes baseball so special.

Seeing a guy up in the Big Leagues from Harvard—that’s what everybody’s experiencing with Jeremy Lin right now—you all share in that. All of us at Harvard baseball share that with Frank. He’s been very humble about it. He knows the difference between somebody else getting the shot up there and somebody else making it.

As a hitter, it can be one ground ball that gets through per week and that’s the difference between being a .260 hitter and a .350 hitter. As a pitcher, that guy that took you deep, if he’s this much underneath the ball, it’s a pop up.

It’s such a game of inches, it’s incredible. Whoever came up with 90 feet? Every play is a bang-banger at first base. Why wasn’t it 85 feet? And who came up with 60 feet, six inches? If it was further back, it’d be such an advantage for hitters. If it was further up, it would be all pitching. It was just the perfect measurements. No one has ever messed with it; it’s just amazing.

I think everybody appreciates that, and when they’re looking at a box score, they’re not only seeing Frank Hermann, they’re seeing themselves and going back to playing ball.

It’s something they can never take away from you, and I tell the guys that every year. When you leave here and they send you out to those concrete caves where you’re pushing a pencil around and reading the Wall Street Journal every day, once Feb. 1 comes, you start thinking of baseball. And that happens to everybody, anyone who’s played this game. Deep inside, I know you guys are baseball fans too.”

I KNOW WHAT YOU DID LAST SUMMER

“We’re not sending these guys out [to summer leagues] just to improve for Harvard, but we’re sending these guys out to represent the school as well as to have some great experiences. I remember Trey Hendricks [’04] a few years ago who was drafted [after college]. Trey was from Houston, Texas and played…as a freshman in the New England Collegiate League [over the summer]. His sophomore summer he played in Alaska. His junior summer he played down the Cape.

The career placement services at Harvard called him and were saying, ‘You have to do something for your resume.’ I remember knocking on the door there and walking in there and saying, ‘Excuse me, but I’m Joe Walsh, the baseball coach, and I’d like to have a little personal chat with you.’ I said, ‘Are you kidding me?’

This is about the experience that he’s had. A kid from Houston, coming to Boston, playing in Northern New England, living on a farm with a family, and then going up to Alaska for a summer? Trey was fishing at two in the morning with the Land of the Midnight Sun out there and living with a family from Alaska. And then, his junior year playing on the Cape and getting drafted? That’s a lot better than picking out ties for some law firm at lunchtime and making copies, saying that you worked in a law firm. So our guys going out and playing summer baseball is huge, and I’m counting on that to be a big plus for our team this year. I’m looking forward to keeping that edge every year.”

WARMING UP TO THE SEASON

“When you get out there [to a warm climate to play baseball], you need to make a decision whether to put the sun block on when you get out of the hotel, or do you put it on when you get to the field? Playing in warm weather is something that gets anybody excited and going to Arizona and Florida and playing a game of baseball in the warm weather.... I don’t have to tell you what it’s like in the spring back home when the cold’s running through you. So getting away isn’t all that bad.

But there’s going to be some challenges. We’re going to see guys on the mound that we don’t know about, that we haven’t seen. That Arizona team’s going to be filled with future draft choices and guys that can flat out play. There are going to be 3,000-4,000 fans all over us, but I like that environment, and I’m hoping our team responds to it. It’s just part of being a New England ballplayer, but I think guys that come here, they want to play that type of schedule.

I remember when I first got here I looked at the schedule, and we were playing Division III teams down in Florida. The first call I made was to the University of Miami down in Florida, who were the National Champions, and I said, ‘You guys have been ducking us. When are we going to play?’ I got my three-game series. When I got back to the team, I looked at everybody’s faces, and the ones that went, ‘Yeah, we’ve got a good team,’ those were the guys I wanted.... I think the guys get excited.”