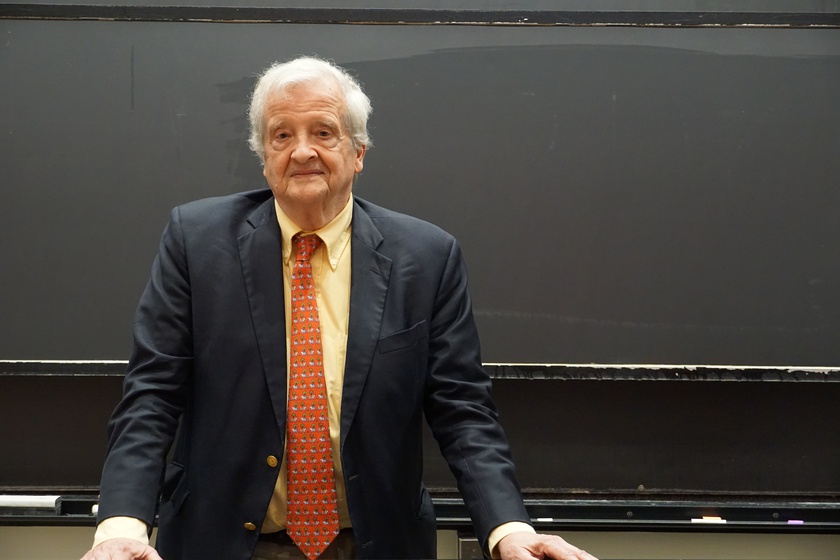 The “Ancient Greek Hero” professor sat down with Fifteen Minutes to discuss what we can learn from the Ancients. “If we sweep under the rug the bad parts of the heroic world, then we won’t understand why we have to keep processing and seeing what their mistakes were, just as we try to imitate what’s good about them,” he says.

Gregory Nagy is the Francis Jones Professor of Classical Greek Literature and Professor of Comparative Literature. In his time at Harvard, he has held various positions including Chair of the Classics department, Chair of the Committee on Degrees in Folklore and Mythology, and Faculty Dean of Currier House.

This interview has been edited for length and clarity.

FM: You’ve been teaching GENED 1074: “The Ancient Greek Hero” for nearly 50 years now. How do you keep the material fresh for yourself?

GN: I think my answer is that it’s the beautiful literature that keeps itself fresh, and it refreshes me! I started teaching Heroes, let’s say, 47 years ago, and I say that because I’ve been married to Holly for 47 years, and I feel the same way about her! It’s the freshness of making contact with beautiful systems of thinking, of feeling, including persons who are systems of thinking and feeling. So I just can’t get over it — it’s a lifetime thing.

FM: Why do you think it’s remained such a popular course?

GN: I’d say people will take the course because “hero” is such an important word in our vocabulary. The world of heroes back when is larger-than-life. And people are larger-than-life good, but when they’re bad, they’re larger-than-life bad as well. And if we sweep under the rug the bad parts of the heroic world, then we won’t understand why we have to keep processing and seeing what their mistakes were, just as we try to imitate what’s good about them. So, I just find it has a universal appeal that withstands all the changes of cultures and upheavals of society, and it’s comforting.

FM: What’s one thing people get wrong about Greek mythology?

GN: Very easy: “Somebody that I admire did something wrong, so they’re not my hero anymore.” That’s not a very Greek way of saying things, because a hero isn’t 100 percent admirable.

FM: You’ve injured your Achilles tendon. As someone who teaches the story of Achilles, are you reading anything into that area of injury?

GN: Ha! Well, you know, one very interesting thing is that of course in the Homeric “Iliad” that has come down to us, there’s no mention of the special death of Achilles. But in “Iliad 5,” there is an ambitious Trojan archer, and he takes aim and manages to wound Diomedes, who was an Achilles rival. And I am not saying this in the Homeric Greek, but essentially, Diomedes says “Haha, you’ve got the wrong hero!”

FM: Where is the source text we get the death of Achilles from?

GN: That comes from later texts based on what is called the epic cycle. Unfortunately, all we have is plot outlines, so what we have to do is reconstruct on the basis of references to the cycle. With the narrative of the Achilles heel, one of the questions I ask in the General Education course is what is the Achilles heel, what is his most vulnerable thing? And the smartest answer I ever got was Patroclus. When he dies, the world of Achilles falls apart.

FM: Do you think Achilles and Patroclus were lovers?

FM: Your brother Joseph Nagy teaches in the Celtic department — can you pinpoint any aspect of your childhood or upbringing that contributed to your shared love of mythology?

GN: I can! I am 12 years older than he is, so he was the kid, and when he was in high school, I had a hard time deciding whether I want to spend my whole life with Greek and Latin civilization or with Celtic civilization. I said to him, hey, there’s a summer school course in medieval Irish. He took that course and was never the same, and so he did what I would have done if I hadn’t done Greek and Latin.

FM: So how did you first get into Homeric poetry?

FM: Where do you see the field of Classics going, given that there’s seemingly finite material to work with?

GN: I wish we had the cycle that we talked about earlier — all we have is plot outlines and prose. I should say that my biggest regret as an old man is that so little of Sappho — who I think is one of the greatest masters of verbal art — how most of Sappho’s songmaking has not survived. That is so depressing. It’s too painfully finite, but what we have is just, how shall I say it? It’s enchanting, is what it is. It’s enchanting.

FM: Who would you rather have as a student: Hector or Odysseus?

GN: If I were a sixth century Athenian, I would say Hector. Odysseus is also very important, but here’s something that will surprise you: John Finley, the former Eliot professor, used to say that Odysseus has bad press in all of the Greek literature except the Homeric “Odyssey.” Odysseus is this trickster figure that sometimes illustrates cultural norms by violating the norms. He’s not so much a model for leadership. For example, I mean, talk about survivor’s guilt when he comes home from Troy and he’s the only survivor. What kind of leader is that? So I guess I’m answering … my answer is … oh God, I guess I’ll say Hector. But I also want to say, to maybe get off the hook a little bit, Mr. Finley used to say there are two kinds of humans: “Iliad” people and “Odyssey” people.

FM: Which one are you?

GN: I love to read the “Odyssey,” but I think I have to be an “Iliad” person. Ooh, I don’t know! I can’t take it back now. Look, the “Iliad” and the “Odyssey” are like two sides of one coin. You can’t really get away from one and think of only the other — I think for a complete humanistic picture you’ve got to look at both of them and how they evolved together.

FM: If you could have any mythic creature as a pet, which would it be?

GN: I would say Argos, the hunting dog of Odysseus.

FM: Halloween was this Monday. Any memorable costumes you can think of?

GN: Oh, well, if you know Mr. T, do you mind if I circle back to tricksters?

GN: In Winnebago traditions in Wisconsin and Minnesota, there is a special kind of trickster figure, who, after he finishes telling all the trickster stories in the role of the trickster sort of acting it out, at the end he goes through every social norm he has violated so that people understand what the real rules are. Isn’t that amazing? So in a way, that’s what happened with Mr. T: he had a Saturday kids’ program back when there was still TV in the way there isn’t now, and what he would do was there would be a cartoon of everything that happened, and then at the end he would do a moralizing summary of where things were kind of iffy. But, anyways, that’s what our “Odyssey” shows you: it makes the violations pretty clear.

GN: I don’t want to get too political, but I get very upset when the polls don’t give me any hope, and I look for the outlier. But then I can get very disappointed, and I’m afraid of disappointment. But sometimes hope itself, if you mix it with pessimism, can make hope even more enjoyable if the pessimism is defeated by optimism.

FM: Last question: you’ve been at Harvard for over 50 years — looking at Harvard like a Ship of Theseus with all its parts changing, do you think it’s the same place as it was in 1966 or something else entirely?

GN: While Socrates is in prison, the Athenian ship of State is making its pilgrimage from Athens to Delos, the sacred island of Apollo, and back. It’s an Athenian taboo to execute prisoners of state while this ship is in progress. The word for sacred voyage is — get this — theoria, which is where we get “theory.” And so he can stay in prison and theorize as long as the ship doesn’t come back from the island, and the ship is supposedly Theseus’s original pilgrimage ship, the one where he saved Athens from the minotaur. But the idea is that by the time of 399 when Socrates is executed, there’s not a splinter of the original ship left. So here’s where the good part comes in: the journey of the ship no longer exists, but theory still exists even though Socrates was executed. So in a sense, the ideal is there, right? Instead of the sacred ship, you now have theory as contemplating the universe, theorizing, dialoguing intergenerationally. That’s pretty damn good!