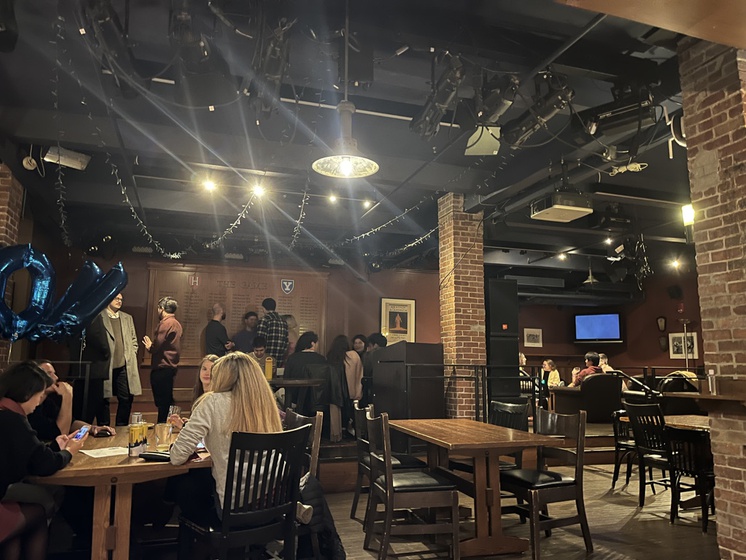 Charlotte R. Rediker Patrons seated with drinks at the Queen’s Head Pub on Oct. 20, the second day of opening week.

For the first time since the Covid-19 pandemic began, patrons crowded around the pub’s pool table and dart board, munching on tater tots and mozzarella sticks.

A flood of laughter and chatter greets patrons as they walk into the Cambridge Queen’s Head pub. Greeted by hosts dressed in sleek black, some clientele present passports, others their driver’s license, all alongside Harvard University IDs. Soft yellow lighting illuminates old placards hanging on the wood-paneled walls; after a two-week soft launch, the room already smells slightly of beer. Entering the pub, says employee Lucy H. Vuong ’26, feels like strolling into Harry Potter’s Diagon Alley.

The pub, situated in the basement of Memorial Hall, held its grand re-opening on Oct. 19. For the first time since the Covid-19 pandemic began, patrons crowded around the pub’s pool table and dart board, munching on tater tots and mozzarella sticks. “It’s a really lively, energetic environment,” says Olivia L. Johnson ’25, who works as a host and bartender.

Unlike in other Harvard-run cafes, it’s difficult to spot a computer in the Cambridge Queen’s Head. “I really want to give students a community space where they can be themselves, let loose a little bit,” says Zachary L. Tripsas, general manager of the pub. “Sometimes the most important space on a campus is where your academics and all of those other pressures can disappear.”

Matthew G. Kung ’23, a patron at the pub, adds that in comparison to other social spaces on campus, the pub seems “a bit more put together and mature,” the kind of venue that “when we’re 40, we could see us and all of our dad and mom friends going out for a drink on a Thursday night.”

Johnson emphasizes how much she values working at the pub. She worked at Target throughout high school, she says, and a service job teaches important lessons about how to interact with people of all backgrounds.

Working at the pub also serves as a respite from Harvard’s academic stressors. “It’'s time I’'m intentionally making not about school at all,” says Jonathan R. Chinen, a student manager who is dual-enrolled at the Graduate School of Design and the School of Engineering and Applied Sciences. “The nice thing about this type of work is that the scope of your role is very specific, very clear, and you’re valued for doing those clear things.”

As general manager, Tripsas focuses on creating a tight-knit culture among employees. “I love to see how very different people can work in the same space and still achieve the same goals,” he says.

Many of his employees attest that Tripsas’s efforts to build community are paying off. Highlighting the respect that all staff members share, graduate and undergraduate alike, Chinen says, “We’re crafting this experience for the larger Harvard community together.”

Getting the Queen’s Head up and running was an enormous challenge that required extensive cleaning and the onboarding of new staff, Tripsas says. Nonetheless, he’s already preparing for the next semester, when he hopes that the pub will host guest speakers and poets, a drag show, and a battle of the bands.

As Tripsas looks forward, the Queen’s Head is struggling to look back. Liao says she wonders to what extent institutional memory can be preserved by an almost entirely new staff. Even for patrons who remember the pub pre-Covid, a kind of pandemic-era amnesia emerges. While Jonathan Z. Zhang ’23 remembers the pub as both a dance and study space, few others have distinct memories. Customers and employees alike seem focused on moving forward.

“This is a train running full speed ahead — it’s continuing to do that,” Tripsas says. “Sometimes there’s a bump on the rail, but it doesn’t stop that train from going.”